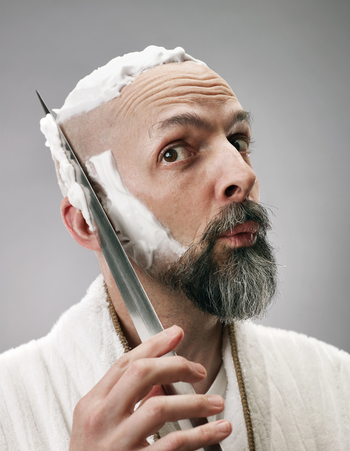 Neal Town Stephenson (born October 31, 1959) is a very tall man, as well as the author of (in chronological order of publishing):

He is known for somewhat idiosyncratic pacing, multiple interwoven plots, doing his research and sharing it in excruciating detail, assuming that his readers are geniuses, and a Pynchonesque tendency to throw in long, seemingly pointless digressions: a lengthy erotic story on antique furniture and stockings, say, or a three-page memo regarding the proper use of toilet paper in an office environment. His more recent books also tend to be practical arguments in favor of electronic books supplanting paper copies (read: long), with Cryptonomicon coming in at well over 900 pages and Anathem at nearly the same length before the many glossaries and appendices. Impressively, he is also known for penning his novels longhand, more or less straight through, from beginning to end, with minimal revision. He is widely considered to be rather poor at endings, with many of his novels reaching a climax and then more or less ending immediately afterwards with little to no denouement, though some of his novels (Cryptonomicon in particular) are more infamous for this than others.

A recurring theme in Stephenson's work involves the classification of humanity into a typography of functional castes based on their approach to practical and theoretic knowledge; this is spelled out most explicitly in his novella-length essay In The Beginning... Was The Command Line

, where humanity is divided into Morlocks (those willing to pursue low-level technical knowledge) and Eloi (those unwilling to do so). However, the details vary from book to book; Cryptonomicon expands the concept into a Standard Fantasy Races-style typography of Elves, Dwarves, Men, and Hobbits smattered with occasional Wizards and a single specimen of Gollum, while Anathem could be considered a near-thousand-page meditation on a similar theme. Not surprisingly, Stephenson's heroes always fall into a technically or theoretically sophisticated caste.

He was making a motion-controlled swordfighting videogame

◊ a screen-breaking photo with him, Neil Gaiman and Neil Armstrong.