Literature / The Rise and Fall of D.O.D.O. 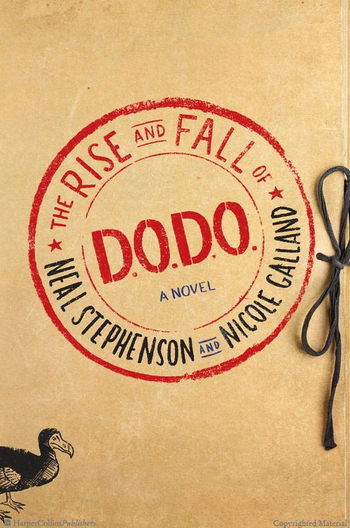 Get that DOer in the ODEC to perform a DEDE in the DTAP, Stokes!
"If anyone from DODO ever reads this, for the love of God please add corset-makers to the list of abettors we need to recruit in any Victorian DTAPs."
—Melisande Stokes
Advertisement:

The Rise and Fall of D.O.D.O. is a novel by Neal Stephenson and Nicole Galland about a secret government organization investigating time travel. Through letters, chat logs, and the "diachronicle" written by the main protagonist, we chart the organization's discovery of magic, its development of an alphabet soup of acronyms, and its conflicts with stubbornly independent witches, creeping bureaucratic dysfunction, and an ancient banking family concerned about the effects changing history might have on the derivatives market.