Doing In the Wizard 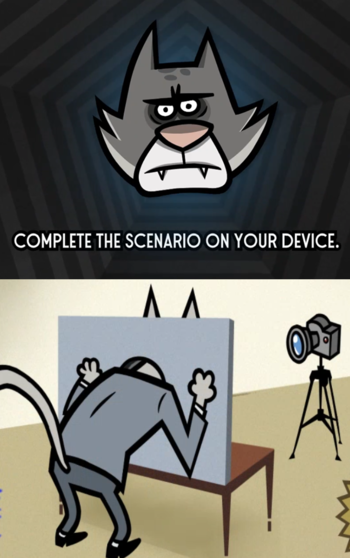 You have no idea how easy it is to make yourself look like a disembodied head in a nebulous void.
Homer: Wha- Golf course? Did I dream that whole thing? ...Maybe the desert was just this sand trap. Oh, and I bet that crazy pyramid was just the pro shop. And that talkin' coyote was really just a talkin' dog.
Dog: Hi, Homer. Find your soul mate.
Homer: Hey. Wait a minute! There's no such thing as a talkin' dog.
[Dog barks]
Homer: Damn straight.
— The Simpsons, "El Viaje Misterioso de Nuestro Jomer"
Advertisement:

Removing a relatively poetic or mystical element (or possibility) and replacing it by way of retcon with a more "realistic" one, in a revision, sequel or other adaptation, or occasionally even just later in the same story. This is pretty common in a fantasy-to-Sci-Fi situation, probably because the two aren't too different in the outcome produced — a magical invisibility ring vs. a technological cloaking device are functionally the same.

However, it tends to disgruntle fans of the original, especially when the explanation is less satisfying than the mystery. Amusingly, if the answer is in technobabble, its "reality quotient" is just as silly as the initial explanation, even if certain anti-magic Moral Guardians may like technobabble better. It can also demand a whole sequence of coincidental oddities, which (as observed by Aristotle) just makes it less convincing.

Another problem this trope might encounter is that, while fans only expect magic to have the same effect while used in the same way, the audience may be less willing to suspend disbelief when converted into hard science, unless it is prefaced with some kind of pseudoscientific material specifically stated not to follow standard physics (of course, doing this still keeps the stuff technically magic, just not, you know, magic).

When this is a External Retcon to an ancient mythology rather than the franchise's own mythos, it is called Demythification.

Compare and contrast with How Unscientific!, as well as Unscientific Science (where the "scientific" explanation is just as nonsensical as the magical one, or even moreso). See also Sufficiently Advanced Alien, The Magic Goes Away, Magic Versus Science, and Maybe Magic, Maybe Mundane. Also compare Clarke's Third Law, which explains how the unexperienced could see technology and science as a form of magic. May overlap with All Just a Dream, Through the Eyes of Madness, and Lotus-Eater Machine, if used to reveal that the removed supernatural only existed in a character's mind; and "Scooby-Doo" Hoax and The Masquerade, if it is revealed that the supernatural never existed but was faked by someone, or some group working to some end. Contrast Magic A Is Magic A and The Magic Comes Back. Has nothing to do with the execution of magic users, or targeting them in combat situations.

The full inversion of this trope is a trope unto itself, Doing In the Scientist.