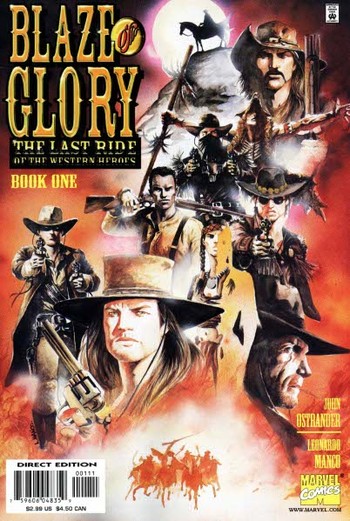 The Sensational Seven reunite for one last ride.
Men Die. Every single one of us. That's a fact and that's our fate.
— Rawhide Kid
Advertisement:

It is 1885. The peace of the quiet town of Wonderment, Montana is broken violently when a group of enforcers dressed as nightriders enter the town at night, setting fire to the buildings and shooting many of the residents. They mean to drive the residents out... but the people of Wonderment aren't so easily cowed.

Reno Jones, formerly one half of the duo known as the Gunhawks, rides out of town alongside the fur trapper Marcel Fournier to recruit allies to save Wonderment. The Rawhide Kid, Kid Colt, Two Gun Kid and The Outlaw Kid all add their guns to Reno's cause. The Indian Red Wolf as well as the mysterious phantom known as the Ghost Rider also join the fight, and together they will protect the town, or die in a Blaze of Glory. Maybe both.

Blaze of Glory: The Last Ride of the Western Heroes is a 4-issue miniseries written by John Ostrander and drawn by Leonardo Manco. A more realistic take on Marvel's western heroes, it retcons some of the original stories (most notably the aforementioned Gunhawks) as simply dime novel retellings of real events. The same creative team would go on to make a sucessor to this story for the Marvel MAX imprint, starring the Rawhide Kid and titled Apache Skies.

Tropes included in Blaze of Glory: