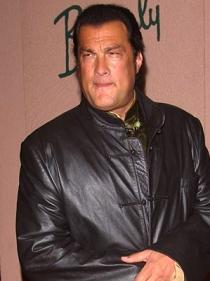 Getting ready to snatch some birthdays.
"Every Seagal movie features his character as a humble, soft-spoken guy who just gets pushed too far, to the point that he has to go on an ass-kicking rampage, standing up for the little guy with each arm he breaks."
— Cracked.com, discussing one of Seagal's more infamous kills

Steven Frederic Seagal (born April 10, 1952 in Lansing, Michigan) is an Actor, producer, writer, musician, activist, 7th-dan black belt in Aikido, reserve deputy sheriff, father of seven, Buddhist, "cultural ambassador" of the United States to Russia (according to the Kremlin, at least), and guardian (legally and literally) of the only child of the 10th Panchen Lama of Tibet. According to That Other Wiki he was also the first foreigner to operate an aikido dojo in Japan.

For the last few decades, the ponytailed star has neck-punched his way though dozens of movies since his late-eighties debut in Above the Law (1988), which was directed by Andrew Davis. His films largely consist of him shrugging off bullets, taking on dozens of mooks singlehandedly and eventually killing the Big Bad in brutal fashion. Several times over.

After the success of his first movie Seagal went on to make box office hits Hard to Kill, Marked for Death and Out for Justice, securing his place as a top action star during the late 80's and early 90's. Before his limitations became obvious it even seemed that he might make the transition from exploitation films to serious drama, à la Mickey Rourke. In his review of Above the Law, Roger Ebert even claimed that "[Seagal] can play tender and he can play smart, two notes often missing on the Bronson and Stallone accordions".

The apex of his success came with his most well known movie Under Siege, which was also directed by Davis. Unfortunately this proved to be the beginning of the end of his big box office success. The 1994 film On Deadly Ground was a pet project of the actor, with a large budget and even an all-star cast. Co-produced, directed and starring Steven Seagal, the movie was an Anvilicious environmental crusade against evil oil companies which ended up being a Box Office Bomb.

Despite Under Siege 2: Dark Territory being successful, Seagal's movies rapidly declined in financial success. He seemed to make a comeback with Exit Wounds, but his follow-up Half Past Dead was a critical and commercial flop and since then most of his films have gone Direct to Video. He made a proposal to have American releases of Tony Jaa's Thai smash-hit Ong-Bak re-cut with him in the prologue and epilogue as the Mighty Whitey who trained him into a Muay Thai master, but the idea was rejected. Later he was seen in the reality TV show Steven Seagal: Lawman and making his return to the big screen in 2010 as the main villain of Robert Rodriguez's Machete. He also recorded two albums: a debut "Songs from the Crystal Cave" and straight blues "Mojo Priest". He also created and co-wrote many episodes of the TV series True Justice (starring guess who).

There is also an energy drink made in his name: Steven Seagal's Lightning Bolt.

THIRTEEN repeat cuts of a guy getting kicked out a window.

THIRTEEN repeat cuts of a guy getting kicked out a window.