Film / Fire Down Below 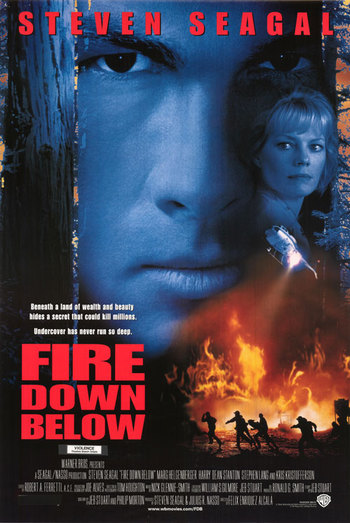 After On Deadly Ground, there came Fire Down Below. However, it's far mellower and less heavy-handed than is that film.

In the peaceful Appalachian hills of eastern Kentucky, toxins are being dumped into abandoned mines, causing environmental havoc, but the locals, mindful of their jobs and the power of the mine owners, can do nothing. Environmental Protection Agency CID agent Jack Taggart (Steven Seagal) is sent to investigate, after a fellow agent is found dead, probably not by accident. The EPA has received an anonymous letter from the town of Jackson, Kentucky, and Taggart goes there undercover to continue his colleague's investigations. It turns out that the Hanner Coal Company, owned by Orin Hanner Sr. (Kris Kristofferson) is responsible for the dumpings, and that it doesn't like Taggart nosing around. Thus, it sends some of its goons to go and rough him up...

As per usual, the critics hated it, and it was yet another financial failure.

Not to be confused with the unrelated 1957 film of the same title.