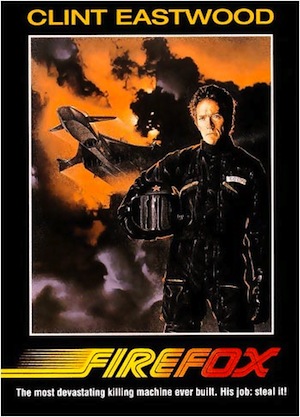 "You must think in Russian."
— Dr. Baronovich
Advertisement:

1982 Movie adaptation of Craig Thomas' 1977 novel, the first real technothriller, starring, directed by and produced by Clint Eastwood. The Soviet Union has developed a new superplane, the MiG 31, called by the Americans "Firefox". It's capable of Mach 6, can't be detected on radar and has weapons launched by thought (but in Russian of course).

There are some differences from the novel,note Most notably, no requirement to "think in Russian" to control the plane's weapons in the novel but Thomas fans like the adaptation and Thomas himself dedicated his sequel book Firefox Down to Eastwood.

Note that there is in fact, an actual MiG-31

(NATO reporting name Foxhound) and that it reached service in the same year as the movie reached theatres. It's far less capable than its movie counterpart: the only thing it can do well is go really fast.

In the novel, when a character points out the Belenko defection, and resultant false alarm, as a reason not to panic about the "Firefox", another tells him that their information is that the plane is seriously as good as feared.

Predates by two decades and has nothing at all to do with the web browser Mozilla Firefox.