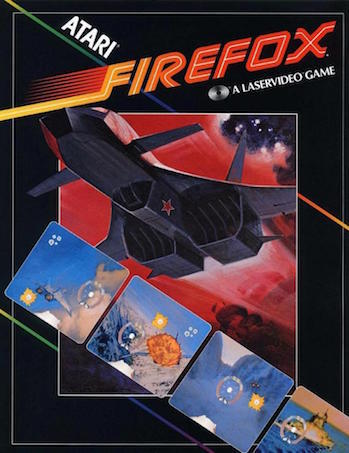 At least you don't have to think in Russian.
Advertisement:

Firefox is a 1984 Arcade Game from Atari. Based on the Clint Eastwood technothriller film, this was Atari's first and only foray into the world of laserdisc games.

As with the movie, you play an American pilot who has to steal the Soviet Union's top-secret superplane, the MiG 31 "Firefox", and fly it out of the country. In gameplay terms, this translated into a First Person Rail Shooter similar to the first level of Atari's Star Wars — you moved a cursor shooting down radar traces, enemy missiles, and pursuing jets, all while trying to avoid hits to conserve fuel. The only "flying" comes from periodically choosing whether to fly in the sky (which uses less fuel) or near the ground (which had fewer enemies). The game used video footage for the various backgrounds, enemy jets, and occasional cutscenes.

Firefox was unveiled with a disastrous showing at the fall 1983 AMOA convention; unfortunately for Atari, its release didn't fare better — arcade operators were growing hesitant into spending more money on expensive and unreliable laserdisc games, and the game relied on too many bleeding-edge hardware components prone to frequent breakdowns. The game's scarcity and expensive upkeep leaves it relatively obscure even among longtime collectors.