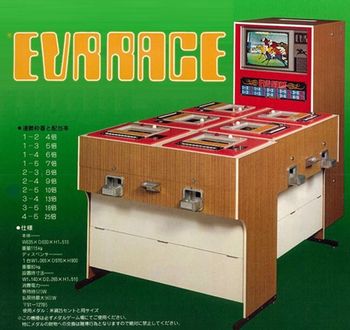 Even Nintendo had to start somewhere.
Advertisement:

EVR Race was a 1975 betting simulator, and was one of Nintendo's earliest video games. While it did not use sprites as its contemporaries did at the time, it instead used the Electronic Video Recording System, an experimental predecessor to the likes of the VHS tape. Its cabinet utilized a mechanism that randomized between pre-recorded Full Motion Video reels of either a four-way race involving horses — the default setting — or cars, which could be swapped out at the decision of the cabinet's owner, and there were reels available for every possible finishing order. Players would choose one of the four horses (or cars), and put in a coin. Then, they would watch the chosen reel, and the player who bet on the horse in first place would win.

While Nintendo acknowledges it as its first release, no cabinets are known to have survived.