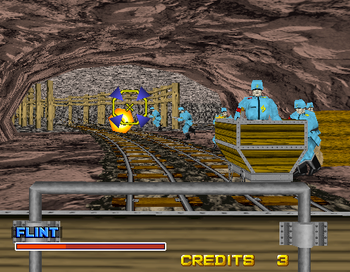 Does not need to involve literal rails.
A variant of either first person or third person shooter in which the majority of the player's movements are 'on rails'; the computer controls most of your perspective and you control the shots. May or may not be a Light Gun Game. Will score very low on the Sliding Scale of Linearity vs. Openness; if there is any player choice at all as to where to go, it will only be in the form of branching paths initiated by specific "fork in the road" situations.
Advertisement:

Often considered a sibling genre to the Shoot 'em Up, as both genres set you on a fixed path and involve shooting things. The primary difference is that while shoot-em-ups have two-dimensional gameplay, rail shooters have you shooting things in three dimensions. Most often you can't control your movement at all, unlike in shoot-em-ups where you are allowed to freely move within the confines of the screen. However, a few rail shooters allow free movement within a 2D rectangle parallel with the screen, while still railroading the player forward "into the screen" along the depth axis.

In a large number of these cases, you cannot dodge enemy shots by simply moving them off of your screen, so you must shoot immediate threats before they have a chance to fire. In rare cases, you may be able to Shoot the Bullet.

Rail Shooters were a very popular arcade format in the late 1980s and early 1990s, mainly because they were able to use the arcade systems' powerful graphics to great effect; some even used Roto Scoping or Motion Capture to make characters which were more detailed and life-like than was feasible on home systems of the day. They were never particularly common on home consoles or computers, and the genre fell out of favor with the rise of more flexible First-Person Shooter games such as Doom and Quake. While new examples do appear from time to time, especially in the Indie Game markets, they are often criticized as (in the words of Yahtzee Croshaw) "a backward step down Anachronism Avenue"

, especially when presented as a AAA game.

Compare/Contrast No Sidepaths, No Exploration, No Freedom (where you control your own movement but are given only one route to follow).

Has nothing to do with railguns. That's in Magnetic Weapons.