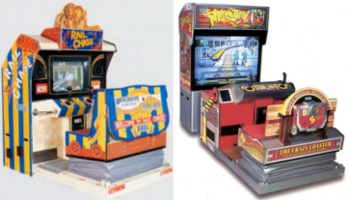 Rail Chase is a very aptly named Rail Shooter from Sega with two games in its series.

The first game came out in 1991. In it, you play a pair of explorers named Flint and Mary who manage to locate a priceless South American artifact. However, just as they get their hands on it, the floor collapses underneath them and they land in a minecart. The two of them get rolling, and eventually find themselves pursued by natives and rival treasure hunters.

The game was noticeable for being a motion ride, an arcade cabinet with a seat that bobbed and weaved with the action on screen. The game was played with two joysticks that controlled the cross-hairs on screen. Oddly, the game never used a life bar; instead, the cart and the indicator on the top of the screen showed the distance between your cart and the boss. Attacks damaged your card until it was rendered unusable, allowing your pursers to catch up and finish you off. The game included four stages, each with their own pursuers who served as the bosses.

Rail Chase 2 was released in 1994; it used the same motion ride seat as its predecessor, but swapped out the sprites for 3D graphics. The time around Flint & Mary have run afoul of the maniacal EKKL empire. They make their escape in a rail cart with the empire's army in hot pursuit. Besides the graphical update, the game allows you to switch tracks and take different paths, allowing some great replay value. Unlike the original, this game uses standard life bars.

The games have the following tropes: