A few months later...
We return to the island.
Again.
SHOOT AT THE HEAD!
A foursome of arcade games based on the Jurassic Park movies. The first two were made by Sega, the third by Konami, and the fourth by Raw Thrills. 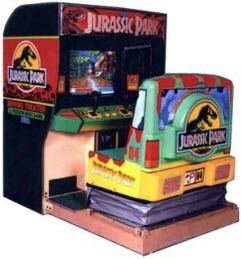 A motion ride Rail Shooter that supposedly takes place after the first Jurassic Park movie. For some odd reason, you head back to the island and brave the dangers of the rampant dinosaurs in the search for...something. They never really tell you. The game controls with two joysticks to move the crosshairs around to show the dinosaurs while the seat moves with the action on screen, similar to Sega's previous rail shooter, Rail Chase. The game was, and still is, noticeable for being seen in many a Chuck E Cheese's.

This game has been riffed on by Retsupurae, mainly because of its large amount of deviations from the movie. 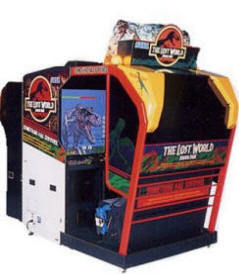 A more traditional light gun game, the game seems to take place in a alternate form of the main movie as you play two park rangers trying to help Ian and Sarah escape the island. Was made into a full theater booth (though not a motion ride) and standard arcade size. Like House of the Dead, it gleans a bit of the system from Virtua Cop in that bosses and certain encounters have colored circles you must shoot to avoid taking damage.

For the DreamWorks game created for the PlayStation and Sega Saturn, see The Lost World: Jurassic Park. 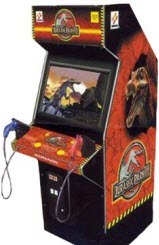 This time you play as two rangers who are under the command of Alan Grant to rescue survivors who have crashed on the island. With the change in developers came a more slower paced version of the game. The main gimmick was that it used a "Escape" button during boss battles to move you to another section of the area to avoid boss attacks. There was also an extremely rare version that used motion sensors ala Konami's previous shooter, Police 911. 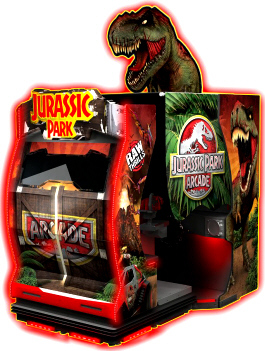 Not surprisingly with the coming of the fourth Jurassic Park film, a new arcade was commissioned to be released alongside with it, this time being developed by Raw Thrills. It was a mounted gun game and much more faster paced than its predecessors. The plot revolves around you and an InGen security team trying to return order to the park by catching the three most dangerous dinosaurs — a Triceratops, a T-Rex, and a Spinosaurus — but first braving the dangers of various other dinosaurs and non-dinosaurian wildlife before you can get the chance.

See also ''Dino Strike Wii' for the Wii, a Spiritual Successor to the series.

The games have the following tropes: