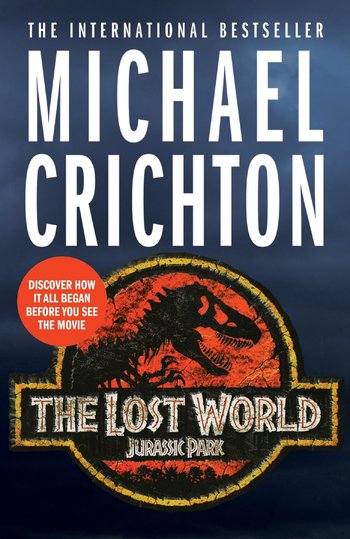 Too much change is as destructive as too little. Only at the edge of chaos can complex systems flourish.
—Ian Malcolm
Advertisement:

The Lost World is a 1995 Science Fiction Thriller novel written by Michael Crichton. This book is a sequel to Jurassic Park.

Six years after the disaster at Jurassic Park, Ian Malcolm — who is revealed to have actually survived the events of the previous novel via a retcon — teams up with paleontologist Richard Levine after learning about Site B, the "production facility" where the park's dinosaurs were hatched and grown, on Isla Sorna near Isla Nublar (the Jurassic Park site). When Levine leaves without Malcolm, he plans a rescue, with a team consisting of engineer Jack "Doc" Thorne, mechanic Eddie Carr, and two stowaway children, R.B. "Arby" Benton and Kelly Curtis.

In all, it bears only a passing resemblance to its cinematic adaptation, The Lost World: Jurassic Park.

Takes its title from an Arthur Conan Doyle novel with a similar premise.