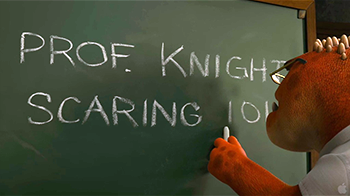 Welcome to Tropes 101. I'm your professor, Dr. Terwilliger Roper. Your course syllabus is being passed around now. It has my office hours listed on it. I assume you have bought the text for this course, Basic Tropes in Fictional Media, 10th edition, by Van der Trope.note  Make sure it's the 10th edition; the 9th edition is badly outdated.

Many subjects actually taught will have at least one 100-level course, especially in fiction. The ones that don't are usually specialized subjects. Occasionally, a fictional 101 course will be way more or less advanced than the course number justifies. Not infrequently 101 will be the only class level ever mentioned. Its ubiquity even allows a character to mark himself as a university student or professor by mentioning (Subject) 101.

The notation of a course as 101 means that it is expected that anyone with normal intelligence and work ethic and minimal talent in the field can successfully complete it, and will thereby acquire the basics of the discipline; also, that anyone with the basics of the discipline will know any fact labeled "subject 101". This connotation leads to the common subtrope "Arcana 101", in which a writer tries to give an accessible flavor to some exotic discipline through introducing it by means of a (usually fictional) 101 course. The sarcastic variant is "Inanity 101", in which the 101 course is in some subject for which it would be unreasonable to expect training to be necessary or useful. The trope title falls more or less under this variant.

Due to Eagleland Osmosis, "(Subject) 101" is often used by non-Americans who have no idea where the phrase comes from — though some British universities have adopted the system, and it is used in Australia.

Not to be confused with Always in Class One (the equivalent would be the earliest offering of the week for (Subject) 101), the trope Room 101 (no matter how much you might hate the class), or the TV series Room 101 (which is named after the former where people send their hates into said room, which, yes, could be these classes).

open/close all folders
Card Games
Fan Works
Film
Literature
Live Action TV
Music
Video Games
Western Animation
Web Original
Webcomics
Real Life
OK, everyone, we're done for today. Make sure to have read chapter one in Van der Trope by Wednesday, as we will be discussing it. Remember, your participation in class discussion is 30 per cent of your grade!