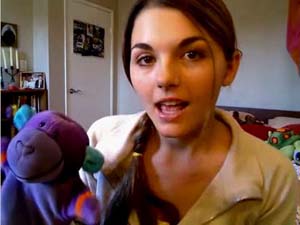 On the 16th of June 2006, a YouTube user with the screenname lonelygirl15

. In this video, she introduced herself as Bree, a sixteen-year-old self-confessed dork. More video blogs followed, many also featuring her best friend, Daniel, perhaps better known as Danielbeast.
Advertisement:

It wasn't long before viewers began to suspect that the blogs were not genuine, and it was eventually discovered that lonelygirl15 was actually an online TV series created by Miles Beckett, Mesh Flinders, Greg Goodfried and Amanda Goodfried.

The early episodes are all set in and around Bree and Daniel's houses, and mainly deal with relationships between characters. Over time, it is revealed that Bree is a member of a religious cult, the Hymn of One, and that they want her to take part in a strange ceremony. Everything changed after episode 65, "Life's Not Fair", when the series took a decidedly dark turn.

Along with various friends, such as rich orphan Jonas and sarcastic "emo" sexpot Sarah, Bree and Daniel go on the run from the Order of Dederah, an evil secret society, and discover the sinister truth behind the ceremony.

While the series tends to stay within the grounds of what is technically possible, the plot is often very implausible, to say the least. Fortunately, the people behind the show seem to be aware of this, and the show is certainly not above the occasional Lampshade Hanging and self-parody. The show also describes itself as "interactive", with fans sometimes being named or even making cameos in the series. However, it is probably best known for being one of the earliest Vlog Series, and establishing a legacy of introducing the novel concept of company-based production value on YouTube videos.

The show may be watched at its official website

, although this episode listing omits some early episodes (including the first episode) and includes videos from the old OPAPHID Alternate Reality Game, behind the scenes videos, and some fan videos. A complete list of episodes, with the original numbering, may be found here

. A character sheet has been created.

The show is sequelled by LG15: the resistance, a Spin-Off featuring Jonas and Sarah.

On June 16th of 2016, ten years after it originally launched, a revival of the lonelygirl15 series was announced. So far, a teaser

has been uploaded that shows Bree seemingly in the employ of the Order of Denderah. This later turned out to be the first episode of LG15: Anchor Cove, which was put on indefinite hiatus after just six videos.