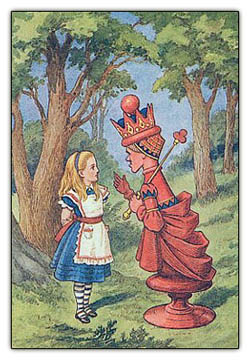 "When men on the chessboard
get up and tell you where to go..."
"Bishops move diagonally. That's why they often turn up where the kings don't expect them to be."
— Small Gods
Advertisement:

As chess is one of the oldest and most famous Turn-Based Strategy games in the western world, games of chess are often used symbolically in media in order to represent war, battles of wits, and similar events. Sometimes this is done directly by the author; other times by the characters themselves (by, e.g., having a conversation about a war over a chess match, using chess as an example).

A very simple such analogy is the Pawn—the expendable, powerless, nameless foot soldier who may, if his actions are brave and his heart is true, become a Queen (although someone more practised at the game may note that the pawn is really a symbol of why you should never overlook apparently powerless people). The pawn may even be an Unwitting Pawn. Also common are the Queen (less honored to the casual observer, but the most powerful and versatile character on the board by far) and the King (not an efficient piece, but his implied capture ends the game.) To extend the metaphor, the Rooks/Castles will be the straightforward, stoic, unmovable lines of defense, while the Bishops are less predictable, more mystical, moving according to divine direction. Knights are less predictable still; they can only move in L-shaped directions, for Pete's sake. But the Knight in Shining Armor imagery clings to them yet; expect them to be bold and daring heroes, if ultimately dispensable for the sake of their sovereign.

A frequent variant is for the author or a character to explain how the situation is not analogous to chess, but rather to some other game such as Poker, Battleship, or Calvinball.

Compare Chess with Death, The Chessmaster (especially the first section of examples for The Chessmaster, most of which could go here as well), Human Chess, Smart People Play Chess, Xanatos Speed Chess, and Check and Mate. See also Talking Through Technique, which can turn a motif into a message. An Astral Checkerboard Decor is a checkered pattern representing otherworldness.

Compare Playing Card Motifs for another motif based on a classic game.