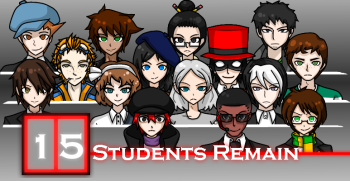 The gang's all here... For now.
"Of course. The situation is: We seem to have been locked into Hope's Peak Academy. No one remembers anything else."
— Kageida Mattou sums up the situation rather accurately.
Advertisement:

is a Forum Role Play on Ace Attorney Online

Super Dangan Ronpa Zero is set in an alternate universe of the game it's based off, Dangan Ronpa. It follows the exact same premise as the original, albeit with new characters, locations, murders and interactions.

The RP was abandoned in 2014 while in the middle of Chapter 4.