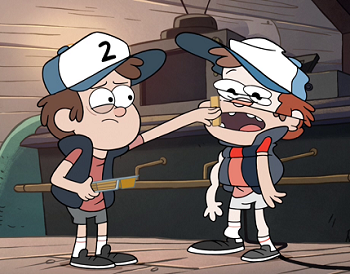 Always make sure the mechanism is clear of paper jams before copying.
"You know how when you make a copy of a copy, it's not as sharp as, well, the original?"
— Doug Kinney #3, Multiplicity
Advertisement:

When dealing with fiction that clones things, the assumption is often made that clones must, after time, decay. That is, with each copy you make whatever Applied Phlebotinum you are using to create the clones will either decrease in effectiveness, or the clones themselves become less coherent since eventually everything is just a copy of a copy. This goes double for dead clones, who tend to dissolve because they're "less than human" rather than leave a proper corpse.

When dealing with a character who has the ability to create clones apparently out of thin air, this weakness is usually the only thing holding them back from whatever it is they're trying to do.

Uses very similar logic to Super Prototype and Conservation of Ninjutsu. The Super Prototype, when it is a one-of-a-kind machine, is awesome and unstoppable. Clones, likewise, seem really great at first— but the more of them you get, the more common and boring the idea of a clone is in the first place. As a result, they inevitably lose effectiveness because several copies of the same thing just wouldn't be all that interesting.

In some instances it may be a Justified Trope: the creator may "program" a shortened lifespan into the clone to protect their property from getting away or trying to take his place. Relatedly, the degeneration may be because the process used to make the clone resulted in a Flawed Prototype, making all the clones a form of Keystone Army that will croak on some future date or circumstance. If the hero has qualms about killing clones, their degeneration lays them to rest. Whether out of being a Mercy Kill or making them seem less real varies.

See also Power Degeneration, which also applies to clones designed with powers. Compare Possession Burnout, when being possessed damages the host in a sometimes accelerated manner each time it's done.

Note that this trope does have some grounding in Real Life: Cloning isn't a fully documented science yet, and genetic kinks in the cloning process, such as shortened telomeres and genomic imprinting, remain factors that may lead to clones having shorter life expectancies than their originals. Clones of clones tend to be even worse off.