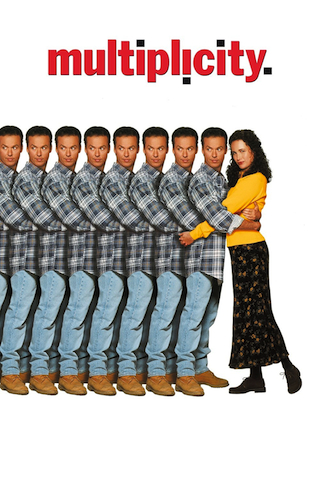 Hey, you know what's better than one Michael Keaton?
Advertisement:

Doug Kinney (Keaton) is an overworked contractor, who wishes to spend more time with his family and for himself, but also doesn't want to pass up opportunities at work. During a routine construction gig, he decides to go off on his own just to collect his thoughts. Seeing how overworked he is, Dr. Leeds (Harris Yulin) offers him an opportunity for more time: a clone.

The Doctor, in an "instant human, just add water", kind of way, successfully creates an exact duplicate of Doug and labels him "2". The clone contains all of the quirks, memories, mannerisms, etc, of the original up to the divergent point - and is horrified at first to discover he can't live his life as the "original" anymore. The doctor gives the clone a set of clothes to walk out with, and the rest is up to Doug.

In order to keep this from his wife Laura (MacDowell), the clone is only allowed to live in the guest room above the garage, and only comes out for work and... nothing much else. Being a complete human, the clone doesn't take to this much. The clone decides to get completely obsessed by his work, fires a long time friend of the original (the firing was justified, but he did so very cruelly), and actually tries to go on a date with someone, being that he is technically not "married". The original, now freed from work responsibilities altogether, spends more time with the wife and kids. Doug eventually allows his wife to go back to work, and tries to rekindle their relationship at a night out...in the same restaurant where the clone has taken his date.

Seeing his clone's problems with isolated life, he gets a second clone to keep the first clone company. The two clones eventually develop completely contrasting personalities, though only as far as a comedy will let it. They also decide to create a clone of their own (to perform the menial household chores neither of them want to do); since this third clone is a copy of a copy, he comes out a little, well, blurry. Over time, things get complicated with the clone arrangement. Situations call for the clones to sneak into the house, and when caught, unaware of the difference, his wife increasingly asks what is up with his dynamic personality.

In order to maintain at least some control over the situations, the original comes up with a couple rules concerning the clones.

Things escalate between the Doug and Laura to the point she leaves to stay with her mother. Doug decides in order to win her back, he will need the clones for one more assignment, and then sends them on their way. The clones now live in Miami, with #2 and #3 running a pizzeria and #4 delivering them.

Despite the film's complete disregard for the actual science of cloning, it is still a lighthearted comedy about the need to juggle life and work, and the possible solutions and new problems you might cause.

This film presents examples of the following tropes: