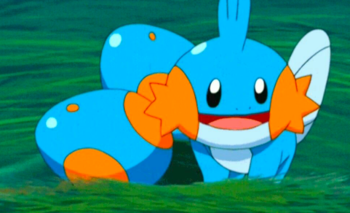 Adorable inside and out.
Advertisement:

In real life, animals' eggs are usually inconspicuous colors like white, grey, and brown, likely because colorful eggs would draw the eyes of hungry predators looking for an easy meal.

Fictional creatures have no such need to hide, and often lay eggs with shells that are not only brightly colored, but match the color and pattern of the creature inside, sometimes down to fur and scales. In a visual medium, this helps the audience guess what might be inside the egg, if it hasn't been established already.

Dragons seem to be particularly prone to this trope. Some reasons are that they're entirely fictional animals, egg-laying reptiles, and are often brightly colored themselves.

Related to Color-Coded for Your Convenience and Amazing Technicolor Wildlife. Sometimes related to Egg MacGuffin, Whale Egg, and Egg-Laying Male. A common feature of Mons series and animal-themed Breeding Sims, and related to Creature-Breeding Mechanic by extension.