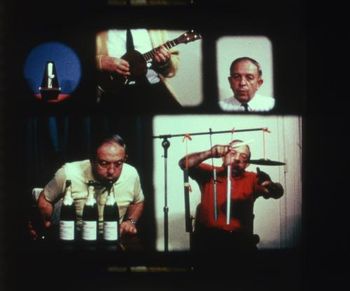 Multiple SIDosis is a nine-minute amateur short film made in 1970 by Sid Laverents. Laverents was a sheet metal worker in San Diego who also belonged to the San Diego Amateur Moviemakers Club. Multiple SIDosis opens with Sid getting a high-grade tape recording machine from his wife for Christmas. Sid starts out by playing the song "Nola" on ukulele and recording it. He then observes that his machine offers "sound on sound" recording in which one can layer on multiple sounds onto a single recording. Sid goes and gets a bunch of instruments out of his closet—mouth organ, banjo, ocarina—and starts playing them. The film starts to break up into multiple split-screen compartments as Sid starts playing more and more instruments and supporting himself with background vocals. Before the film ends there are eleven different windows of Sid doing different things, all layered together to perform the song.

Multiple SIDosis took four years for Laverents to make, working by himself. It was added to the National Film Registry as part of an effort to recognize amateur filmmaking. It is one of only a few amateur films to make the list, along with Disneyland Dream and the Zapruder Film. The film is in the Public Domain and can be viewed here