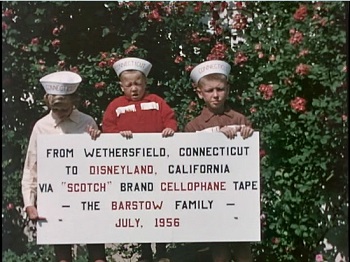 Disneyland Dream is a 1956 home movie featuring the Barstow family of Weathersfield, Connecticut, filmed by family patriarch Robbins Barstow (1919-2010). Robbins Barstow had been an amateur movie-maker since he received his first home movie camera at the age of ten and was a member of the Amateur Cinema League. In 1956 the Barstow family—Robbins, wife Meg, and their children Mary, David, and Daniel—were one of 25 families that won free trips to Disneyland in a contest sponsored by 3M, makers of Scotch tape. Robbins documented his family's vacation and edited it into a 34-minute home movie. The film starts with the Barstows making their submissions to the contest, then receiving word that they had won the prize, then flying cross-country in propeller planes to Los Angeles, where they hit some of the tourist destinations of the L.A. area before visiting Disneyland, which, at the time the Barstows visited, had only been open for a year and still wasn't fully completed.

The film was shot by Barstow on his 16mm home-movie camera. In 1995 he had it transferred to VHS and added a running narration. Disneyland Dream was selected in 2008 for preservation in the National Film Registry as a "priceless and authentic record of time and place." It is one of only a few amateur films on the Registry, along with Multiple SIDosis and the Zapruder Film. The film is in the Public Domain and can be viewed here