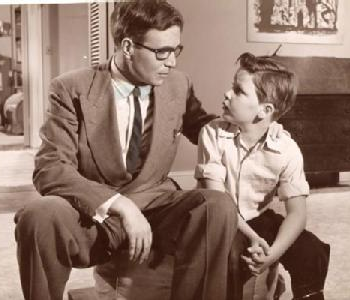 He knows best.
"Serious-minded men who smoked pipes and wore mustaches had written serious instructions saying that this should be done, and so he did it, because he was a serious-minded man who smoked a pipe and wore a mustache and did not take such injunctions lightly, because if you did, where would you be? He had exactly the right amount of insurance. He drove three miles below the speed limit, or forty miles per hour, whichever was the lower. He wore a tie, even on Saturdays."
— Good Omens
Advertisement:

The Standard '50s Father was born in a small town in the US Mid-West (or, as in the case of the quote above, the English Home Counties). His parents were farmers of some sort, or perhaps his father was a druggist. A veteran, he put himself through college (possibly through the G.I. Bill) and is now a white-collar professional... unless he is the proprietor of some small local business (pharmacy, shoe store, grocery, etc.).

The Standard '50s Father is solid, dependable, and responsible. He's Happily Married to his wife, whom he met when they were both teenagers. And if the love he gives his children is slightly distant, it is no less heartfelt for being so. He's an upstanding citizen who rarely swears or drinks to excess, if he smokes he smokes a pipe, and attends a regular "bowling night" with his friends ("darts" if British). If he plays cards it will be bridge, probably in partnership with his wife, not poker in a dingy room full of cigarette smoke. He wears a shirt and tie with dress pants and a cardigan during the day (even while he cuts the lawn on Saturday morning) and sleeps in sensible cotton pajamas. He usually wears glasses. He's buttoned-down, calm, wise, and thoughtful. None but a few things can rattle him: 1.) His daughter getting a boyfriend, 2.) His wife revealing that she's going to have a baby (and her later going into labor), 3.) His wife deciding that she wants a job (assuming that it's her idea and not his), or 4.) The threat of losing his job (combining 3 and 4 could send him into open hysterics). If the Red Scare is in effect, he'll go berserk at the thought of someone close to him being a communist.

When played straight, the Standard '50s Father's primary function is to offer object lessons and moral instructions to the various members of his family. When Played for Laughs, he's the butt of jokes and the perfect example of dorkiness. When played Darker and Edgier, he's often the male version of a Stepford Smiler, hiding his neuroses, insecurities, and other issues behind the fatherly facade, because a man isn't supposed to show weakness in public. Note that he is rarely played straight anymore.

Husband to the House Wife. Father to the Girl Next Door and The All-American Boy. Contrast Bumbling Dad and Amazingly Embarrassing Parents, two tropes created as a direct subversion to this one.