Film / Dreams of a Life 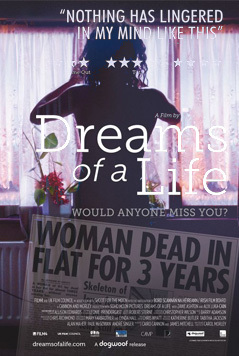 Dreams of a Life is a 2011 British documentary film by director Carol Morley.

(portrayed by Zawe Ashton), who died alone in her London flat in 2003. Despite having plenty of friends and family, somehow, her body remained undiscovered for three years. It was found next to a shopping bag and surrounded by wrapped Christmas presents that were undelivered. Due to the advanced state of decomposition, Vincent's cause of death was never determined.

Morley was inspired to make the documentary after reading a newspaper article that presented the facts of the case but lacked details as to who Vincent was. Tracking down interviewees to learn more about the woman behind the headline, Morley was surprised to find that many of them didn't even know Vincent was dead until they were informed by her. Having lost touch with Vincent, they just assumed she "was off somewhere having a better life than they were".

The documentary raises the unnerving possibility that anyone could find themselves in a situation where they might die alone and unnoticed as Vincent did.