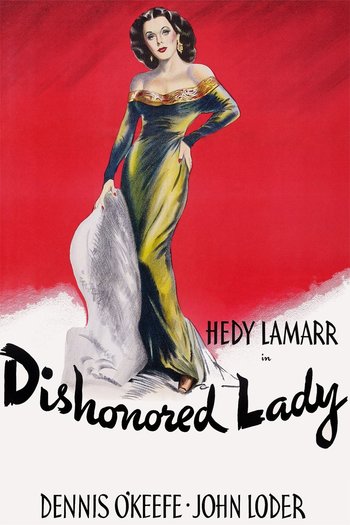 Dishonored Lady is a 1947 Film Noir directed by Robert Stevenson and starring Hedy Lamarr, Dennis O'Keefe, and John Loder, based on a 1930 play of the same name.

Madeleine Damien (Lamarr) is the fashion editor at the high-profile Manhattan fashion magazine Boulevard. Men are attracted to the beautiful Madeleine, in particular wealthy advertiser and jeweler Felix Courtland (Loder), who takes advantage of the fact that she becomes a lively party girl at night. However, her empty life of pleasure drives her to a breakdown, and she makes a suicide attempt by crashing her car near the home of Dr. Richard Caleb, a psychiatrist, who recommends that she leave her job and her lifestyle behind. She does so, and moves into a smaller flat under a new identity, where she meets David Cousins (O'Keefe), a handsome neighbor.

Madeleine seems to have finally found happiness; she gets proposed marriage by David, who knows nothing of her past. But Madeleine is found by Courtland, who is still interested in her, and after a brief stay at his home, Courtland is found bludgeoned to death with a table lighter. Madeleine is charged with the murder and, with David realizing the truth and becoming very disappointed of her, is too depressed to defend herself. Can David believe in Madeleine again? Can he find the truth about the murder? And can he save Madeleine just in time?