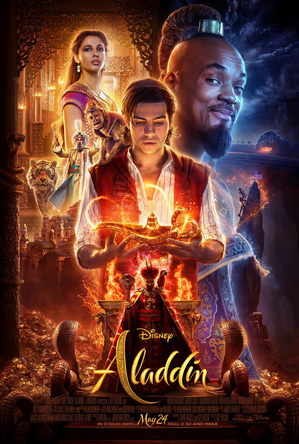 "Your life begins now...Aladdin."
♫ Oh, imagine a land.
It's a far away place,
Where the caravan camels roam.
Where you wander among,
Every culture and tongue!
It's chaotic, but hey it's home.
When the wind's from the east,
And the sun's from the west,
And the sand in the glass is right,
Come on down, stop on by, hop a carpet and fly
To another Arabian Night! ♫
— "Arabian Nights"
Advertisement:

A Live-Action Adaptation of the classic Disney Animated Canon film Aladdin that was released on May 24, 2019. The film was directed by Guy Ritchie, written by Ritchie and John August, and stars Will Smith as the Genie, Mena Massoud as Aladdin, Naomi Scott as Princess Jasmine, Marwan Kenzari as Jafar, Navid Negahban as the Sultan, Nasim Pedrad as Dalia, Numan Acar as Hakim, Billy Magnussen as Prince Anders, and Alan Tudyk as Iago.

It adapts the original film while also including new elements, such as new original songs and characters.

was announced to be in development for Disney+. Two months later, it was announced a sequel was on the way, which will not be a remake of Aladdin: The Return of Jafar (in fact, Disney waited to make the announcement until they could get a solid idea of what the story would be).

♫ Let me share this whole new world with you... ♫
Feedback

The "Friend Like Me" scene from "Aladdin". Note that this isn't the animated version, but the *live-action* remake. The Lion King could never.

The "Friend Like Me" scene from "Aladdin". Note that this isn't the animated version, but the *live-action* remake. The Lion King could never.