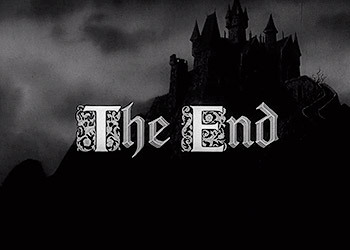 The story's over. Time to put up an intertitle card saying "THE END". If you really want to be sophisticated, write it in cursive. The words "You Have Been Watching" followed by the ending credits was popular in Live-Action Television for a while, particularly but not exclusively in Sitcoms.

In some cases the show will end on a sad note, but the next moment is a flowery card stating "The End", accompanied by a bright fanfare. It is common to play this for laughs.

The French translation, "FIN", is often used with Le Film Artistique or if the filmmakers want an aquatic pun.

The video game variant, seen in quite a few Fighting Game examples, is to show the usual "Game Over" screen after the ending and credits. This time it's not because you failed, it's just because... well, the game is over. Sometimes the phrase "Thank you for playing " is added. If you're unlucky, that will be the entire ending.

Compare That's All, Folks!, and contrast To Be Continued. See also Interrupted by the End.

Interesting variations of this trope: