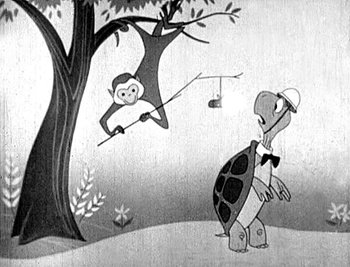 ICBMs were eventually found to be more effective delivery systems than monkeys.
Advertisement:

Duck and Cover (1952) is a short film (nine minutes) directed by Anthony Rizzo.

It is a civil defense instructional film commissioned by the United States government, as the Cold War was getting more dangerous for Americans following the Soviet Union's successful test of a nuclear bomb in 1949. The film, which is aimed at children, is a guide on what to do in the event of nuclear attack. It opens with a short animated sequence in which a turtle named Bert is sauntering down the road. A mischievous monkey dangles from a tree and hangs a stick of dynamite over Bert's head. A quick-thinking Bert then retreats into his shell, while the theme tune says "He did what we all must learn to do...duck and cover!"

The film then switches to live action. A narrator explains what to do if a nuclear bomb explodes. Scenes portray schoolchildren ducking and covering under desks, in school hallways, and under library tables. The film introduces children to the sound of a civil defense siren, then tells them what to do if there is a nuclear strike and no grown-ups are around: go into an air raid shelter if you can find one, duck into alleys or doorways or whatever cover is available, throw yourself flat on the ground if you're in the open, and try to cover yourself with whatever is at hand. The film then ends by cutting back to Bert the turtle in animation, who recaps the lesson by asking the kids what to do, and is answered by offscreen schoolchildren shouting "duck and cover!"

For many years this film was shown to American schoolchildren in order to teach them what to do in case of a nuclear attack, and also probably to teach them to fear the Soviets. It has also for many years been a subject for parody.

Compare The House in the Middle, a similarly bizarre documentary short from the 1950s about surviving nuclear war, but aimed at adults.