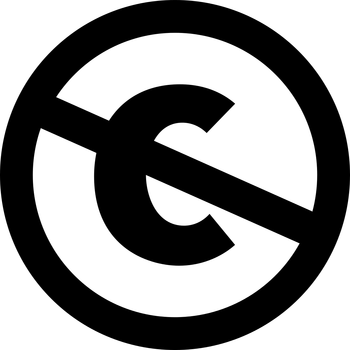 There are two primary definitions for the term public domain. The one we won't be discussing is public land that can be purchased from the government for a small amount of money and if you homestead it for a few years, it becomes yours.
Advertisement:

The term "public domain" that we will discuss here refers to the collective of works not covered by intellectual property rights in any way whatsoever. This is usually due to said rights either expiring or never existing, but it can also be due to the creator intentionally forfeiting said rights. Examples of such works include the English language, the formulae of Newtonian physics, recipes, the works of Shakespeare and Beethoven, and the patents on powered flight. This also applies to many old movies, cartoons, novels, poems, comics, and various other works of entertainment, science, and general knowledge. In general, Public Domain works make for a great resource for those who would like to use properties in their work, but don't have a lot of cash.

Since Public Domain works don't have the protection of copyright or other IP rights, anyone can use them as the basis for new creative works without fear of running into lawsuits or other legal issues. In essence, someone is free to use, adapt, change, or implement entire sections of the work as they so choose (including the entirety of the work), even for profit, all without asking permission or paying royalties. Shakespeare's works, for example, have received numerous film adaptations with their own unique spin on The Bard's tales. People can also use those works, in part or in whole, within a new creative work (someone can quote as much Shakespeare as they want within a film).

In general, works enter the public domain by one of several means:

In the United States, a vast majority of works produced prior to 1927 have fallen into the public domain (with a few exceptions existing thanks to legal issues); works produced thereafter may or may not fall under copyright, owing to a litany of circumstances (including various extensions of copyright terms).

Starting in 2019, after a 20-year dry spell due to the Sonny Bono Copyright Term Extension Act, works made in 1923 have entered the public domain. Throughout The New '20s, works from 1924 to 1933, at least those whose copyright have not been renewed, are expected to enter the public domain.

For certain works, international laws and treaties complicate matters further. While the King James Bible falls under the public domain in the US, over in the UK, the Crown holds it under perpetual copyright. A handful of (currently, African and South Americans) have a so-called "paying public domain"

by which one doesn't have to ask permission for the use of public domain works, but must pay a fee in lieu of roaylties to a government entity. Copyright scholar Pamela Samuelson has described the public domain as "different sizes at different times in different countries".