Art / The Rape of Proserpina (Rubens) 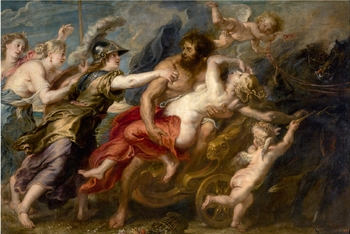 The Rape of Proserpina is a 1636 oil painting by Baroque-era Flemish artist and diplomat Peter Paul Rubens.

Proserpine, goddess of spring and daughter of Ceres, is being kidnapped by Pluto, the Ruler of the Underworld. Despite the resistance put up by Minerva, Venus and Diana, their relationship is on its way to cementing into true romance, the presence of the cupids holding the chariot reigns and urging the horses on away from the other gods.

The painting is currently on display at the Museo del Prado in Madrid, Spain.

Not to be confused for the Bernini sculpture of the same name.

The Rape of Proserpina provides examples of: