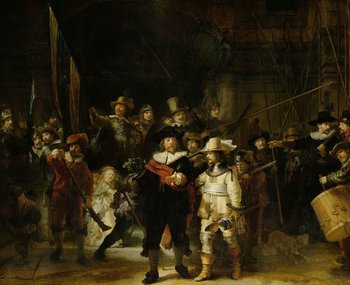 Militia Company of District II under the Command of Captain Frans Banninck Cocq, also known as The Shooting Company of Frans Banning Cocq and Willem van Ruytenburch, but mostly known and most commonly referred to as The Night Watch (Dutch: De Nachtwacht), is a 1642 painting by Rembrandt van Rijn.

It belongs to the collection of the Amsterdam Museum but is prominently displayed in the Rijksmuseum as the best known painting in its collection and the most famous Dutch Golden Age painting.

Not to be confused with the Night's Watch or the Discworld novel Night Watch, which nonetheless uses the painting as inspiration for its cover.

The Night Watch provides examples of: