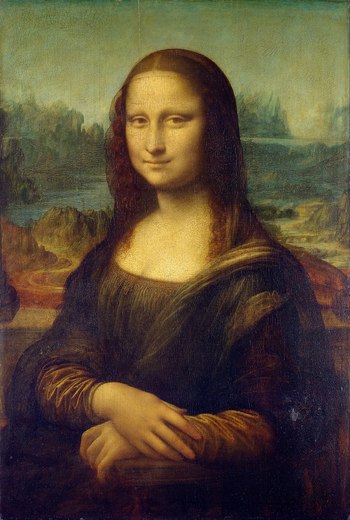 The presence that rose thus so strangely beside the waters, is expressive of what in the ways of a thousand years men had come to desire...She is older than the rocks among which she sits; like the vampire, she has been dead many times, and learned the secrets of the grave...The fancy of a perpetual life, sweeping together ten thousand experiences, is an old one; and modern philosophy has conceived the idea of humanity as wrought upon by, and summing up in itself all modes of thought and life. Certainly Lady Lisa might stand as the embodiment of the old fancy, the symbol of the modern idea.
— Walter Pater
Advertisement:

Without a question, the single most famous portrait painting of The Renaissance and in the Western world as a whole, a true icon of artistic excellence, and the image which represents aesthetic beauty, enigma, and mystery. It's believed to have been painted between 1503-1504 by Leonardo da Vinci, and he maybe worked on it on and off for a decade until 1517. The painting entered the personal collection of King Francis I of France and is famously housed in the Louvre Museum in Paris.

Also known as La Gioconda and La Jocondenote In Italian and French, it's a pun on the feminine form of Giocondo, the surname of Lisa. Gioconda means "the jocund one" or the "happy one", the painting's famous title was coined by art critic Giorgio Vasari (who first described the flowering of art and culture at the time of Giotto as rinascita). Vasari said that the painting was a portrait of "Mona Lisa", which is an Italian shortening of Madonna Lisa (My Lady Lisa/M'lady Lisa would be the correct English translation), and referred to the subject as Lisa del Giocondo, wife of Francesco del Giocondo who was a silk merchant and longtime friend/business associate of Leonardo’s father. But for many years there wasn't any hard evidence to corroborate this. Then in 2005, a researcher found marginalia in an old book in the University of Heidelberg, written by one Agostino Vespucci (cousin of Amerigo Vespucci, yes that Amerigo). In it, Agostino wrote in Latin about:

"Apelles the painter. That is the way Leonardo da Vinci does it with all of his paintings, like, for example, with the countenance of Lisa del Giocondo and that of Anne, the mother of the Virgin. We will see how he is going to do it regarding the great council chamber, the thing which he has just come to terms about with the gonfaloniere. October 1503."

Hence, most academics now accept as a proven fact that the subject of this portrait is Lisa Gherardini (June 15, 1479 – July 15, 1542), who upon her marriage to Francesco del Giocondo became Lisa del Giocondo. But for centuries, "Common Knowledge" was that the subject was a mystery, enhancing the enigma of her smile.

The portrait has long fascinated art historians and theorists thanks to Leonardo's mastery of sfumato, which is an Italian word with no proper English equivalent, but one that refers to the airiness, the blurred quality, and fineness of objects, much like smoke which is visible despite being without colour and form in the air. It's been noted that if one looks at the portrait closely, it's very hard to locate the exact beginning of the smile, but on standing back, the effect is quite clear. Indeed the phrase "mona lisa smile" often refers to the unique nature of the smile; some observers are convinced that the subject is not actually smiling but gazing plainly, while others are certain that she is smiling happily. The size of the painting (77 cm × 53 cm) draws special attention to her expression, which gazes outwards to the observer, almost convincing people that the painting is actually seeing them. This is especially the case when one considers the background, which is generally quite flat and vague, with Lisa sitting against a balcony illuminated with a greenish light, her arms crossed and resting on the right arm-rest of her chair.

A detailed scientific explanation for the nature of the Mona Lisa's smile didn't exist until the year 2000, when neurobiologist Margaret Livingstone wrote that da Vinci created a unique optical illusion by exploiting the difference between human peripheral and central vision: we see a smile when looking at the mouth and cheekbones with our less detailed peripheral vision, but it stops looking like a smile when we use our central vision and look directly at it. Another da Vinci portrait, La Bella Principessa

, also appears to change expressions depending on how you look at the portrait. Creating this effect would have required painting someone's smile by *not looking at it*, which may be one reason is why artists inspired by da Vinci's style weren't able to replicate it.

The Mona Lisa was an immediate hit and widely influential on the next generation of painters; the likes of Raphael Sanzio especially drew on it for his famous portraits (such as Baldassare Castiglione). Vasari, in his landmark book Lives of the Most Excellent Painters, Sculptors, and Architects, praised it for its realism, but that hasn't stopped legends and concepts cropping up around it. In the 19th Century, it became celebrated for being the painting, with much ink spilled on the subject, the art critic Walter Pater lionizing it, and many artists and critics offering weird theories and ideas about who Mona Lisa is. In the 20th Century, it was already considered overexposed by the likes of Marcel Duchamp, the Surrealists, and others. A landmark incident of art-theft brought new attention to the painting and further cemented its legend. It also has had the effect of making the painting completely inaccessible since its now sealed in a special glass container with heavy guards in the museum, thronged by gaggles of tourists.

"I can tell you chaps one thing: it's not always easy to hold this smile."