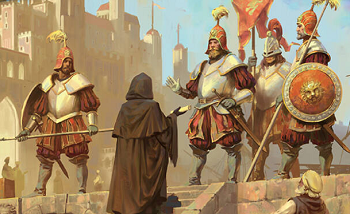 "No, peasant, you will not be allowed to throw off the Emperor's groove. Begone!"
"Stop right there, criminal scum! Nobody breaks the law on my watch!"
— Guards, The Elder Scrolls IV: Oblivion
Advertisement:

The City Guards are the local authorities. They strut about between one tile square and another, looking busy, decked out in more armour than your hero and generally acting superior.

Every once in a while, the hero will encounter a Locked Door guarded by one or two grunts in armour. Generally, they will stand around until you give them the proper item, such as a pass, bribe them with food or occasionally real money, or just get to the right point in the plot. Bad guys attacking the city walls, threatening to break in and murder everyone in sight, are great occasions for checking out guarded rooms.

Often, the city guards (and the guards in general) will be better equipped in appearance than your hero, such as in games where there is no armour for you. Despite this, you're probably stronger than them (unless you aren't), and let them stand in your way only out of respect for the law or... something. Of course, that in itself can get stupid in its own ways, such as when you're in an enemy town. As for the ones in Good Guy towns... do they have no idea what urgent plot points they're keeping you from? Don't they know that the Evil Overlord is marching his forces upon their hapless town? No?! The Guards Must Be Crazy.

City Guards are a common form of the Broken Bridge, in which case they may well be Invincible Minor Minions in order to make Sequence Breaking impossible.

A common cause of NPC Roadblock. See also I Fought the Law and the Law Won.

A common template for fantasy guards.

A common template for fantasy guards.