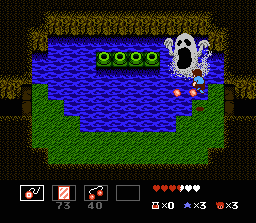 Some vacation.
"HELP! CAPTURED BY EVIL ALIENS. TELL MY NEPHEW TO USE CODE 1776."
— Message from Dr. J
Advertisement:

StarTropics is an action-adventure video game released by Nintendo in 1990. The main character, Mike Jones, is an all-American teenager who visits the tropical C-Island to see his uncle. Mike finds out upon his arrival that his uncle is missing, so he sets out on a rescue mission, with his trusty yo-yo as his only weapon.

After a short while, Mike discovers that his uncle was abducted by aliens. After a series of sidequests involving talking dolphins, witch doctors, a giant octopus, an obstinate parrot, and zombie pirates, Mike reunites with his uncle - who has been trying to save a bunch of good aliens from an evil alien overlord named Zoda. Mike climbs aboard the alien craft and defeats Zoda, rescuing an alien princess and a bunch of alien kids in the process.

The sequel, Zoda's Revenge, was released in 1994. Mike, his uncle, and the aliens discover an alien code that lets Mike travel through time via a magic book. Mike travels through the stone age, ancient Egypt, 19th Century London, the Wild West, the Renaissance, 1800s Transylvania, and Camelot. Along the way, he defeats duplicates of Zoda and is helped by Merlin, who reincarnates himself into several forms. Mike returns to C-Island to rescue his friends, who were taken hostage by the last Zoda clone, and the plot coupons combine to reveal the king of the good aliens.

The games are overhead-scrolling dungeon crawlers reminiscent of The Legend of Zelda with a few twists, such as the ability to jump. The first game features a distinctive control system where all player and enemy movements take place on a grid, limiting where you can stop or turn but making it easy to line up jumps and attacks. The sequel uses a more conventional system where you can stop or turn at any time. Opinions differ as to which scheme is better.

Both games are available for the Virtual Console on the Wii and Wii U, and the first game was included on the NES Classic mini-console as well as being part of the NES Online package for Nintendo Switch.

Where are you from? Tropecola...?
Feedback