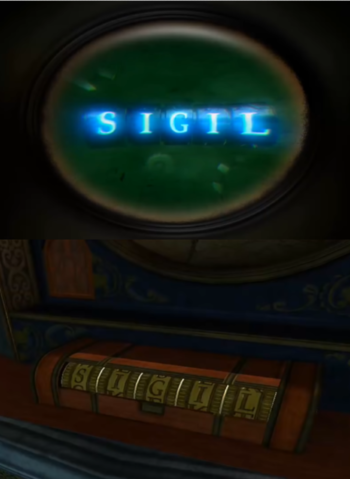 Puzzles that only exist so that you can enter the answer that you have received in another place. Expect the direct answer to be written on a wall in the room next to the puzzle device or similar in the easier cases.

If you are lucky, you have to find the answer split up in parts and properly figure out how to reassemble them into the answer before you can enter it. If you're unlucky, you'll discover the answer was given by an dying NPC a few hours ago, and now that you've forgotten it, the game won't repeat it.

Some people never find the clue and end up trying to brute-force the answer by trying everything. In some cases, this is because the game's Copy Protection has been stealthily disguised as an in-game puzzle, with the actual clue lying somewhere in the Feelies.

More generous games may register that the player has found the answer, and either prompt you with it at the appropriate point, or treat it like an Event Flag, simply opening any door to which you've found the access code.

The answer may be randomized to make it impossible to know without the clues. If it isn't randomized, it presents an opportunity for savvy players to attempt Sequence Breaking, which can fail if the game doesn't allow you to enter the right answer without going through all the motions.