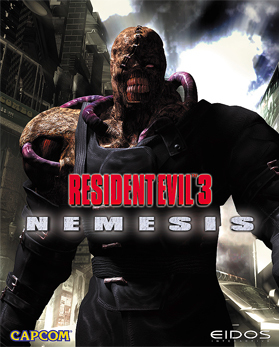 Capcom originally intended to make a Gaiden Game using the Resident Evil 2 engine within a short development cycle. That project was revamped into a numbered sequel when the following sequel, which eventually became Devil May Cry, grew beyond the capabilities of the hardware of the time. Capcom then decided to cap off the PS1 series as a trilogy. Like its predecessor, Nemesis was eventually ported to the PC, Dreamcast, and Nintendo GameCube.

The game opens one day before the events of Resident Evil 2, as the now-defunct Raccoon City turns into a true city of the dead. Barry Burton, Chris Redfield, and Rebecca Chambers have all resigned from the Raccoon City Police Department and fled town, leaving Jill Valentine as the last remaining member of S.T.A.R.S.; Jill opted to stay behind and help the survivors. As a result, she finds herself staring at Hell's gates when a firestorm erupts and conditions deteriorate.

Her escape is cut short by a new biohazard: Umbrella's newest Tyrant, code-named "Nemesis." He's on the prowl for witnesses to the Mansion Incident, and no amount of bullets will stand between him and his goal. Carlos Olivera, a hired gun for the company, stumbles upon Jill and helps her out of a tight scrape with Nemesis. After regrouping with Carlos' squad, Jill and the hapless mercs agree to bury the hatchet and escape before the government deploys a last-ditch measure to contain the virus: a tactical nuclear strike.

Resident Evil 3 eschews the character select from previous games and makes Jill the only playable hero. But it still features Story Branching: this time in the form of real-time selection screens (a precursor to Resident Evil 4's "Press X to Not Die") where the player must make a decision in time or suffer the consequences. Another new feature is a retooling of RE2's "Scenario B", in which Claire or Leon were stalked throughout the game by "Mr. X": Nemesis will frequently appear throughout the game, usually ambushing Jill at inopportune moments. It's up to the player to decide to run or fight. Nemesis drops useful loot upon falling over, but he hits fast and hard... And he'll be back for more later. Other new features include a gunpowder-mixing tool (Jill crafts her own guns and ammo in this one), a dodge maneuver, and a quick turn move.

RE3 also features the first iteration of the minigame titled The Mercenaries, which would become a mainstay in later installments.

Black Command, an iOS and Android game that was released in 2018, has Murphy Seeker as a hired mercenary and the Samurai Edge pistol as a limited edition weapon, part of a Resident Evil collaboration event that started from December 26, 2018 to January 10, 2019.