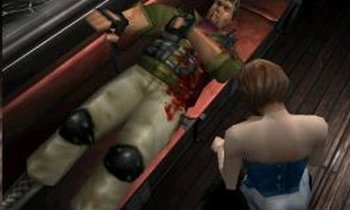 "I'm fine, really—Ow, my back!"
Bob is injured, or perhaps infected with The Plague. He and his companions are far from civilization. What are they to do? Simple, cold pragmatism dictates that there is no hope for Bob, and that his companions ought to go on without him. He may even insist they go on without him. But no! They must do the decent thing, the humane thing, and take Bob with them in the hope that they can get medical treatment for him.
Advertisement:

But alas, Bob's days are numbered, and after all that effort, he winds up coming to a horrible end anyway. Because he's the Doomed Hurt Guy.

The Doomed Hurt Guy is a trope that mainly shows up in war, horror and adventure fiction. It more or less stipulates that a character (usually a minor one) is injured badly and the heroes can't do much for him. This presents them with a Sadistic Choice, wherein they must either choose to abandon him or bring him with them. Despite them trying to save the guy, the poor bastard eventually dies anyway. The reasons for this vary from example to example. Sometimes it's just for pure Anyone Can Die shock value - the audience may not be willing to believe that injured Bob (or whoever) will bite it. Other times, it's to elicit a strong emotional reaction - the death of an injured or sick character who the story has invested a lot of time in can really pull at those heart strings. Also, it can be used to show the futility of the characters' situation, the hopelessness they face, that after all that, the person they've tried so desperately to save ends up perishing anyway, proving that fate is entirely out of their hands.

To qualify for this trope, the character should be someone the heroes make some actual effort to save beforehand. Aversions are welcome.