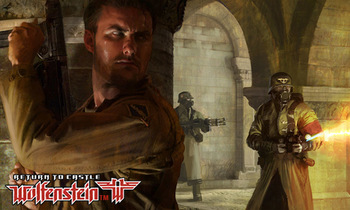 The SS is in Big Trouble!
"So, advanced weapons, chemical and biological research, and now, the occult..."
— The OSA Director
Advertisement:

Return to Castle Wolfenstein is a First-Person Shooter game using the Quake III engine, developed by Gray Matter Interactive Studios and published by Activision. It's the Non-Linear Sequel (hard to call it a "remake") to id Software's Wolfenstein 3-D and it was released in 2001, twenty years after the release of the very first game in the series, Castle Wolfenstein.

The game is set during World War II, following the story of B.J. Blazkowicz, a soldier sent to investigate a secret/occult Nazi plot. After being captured and escaping Castle Wolfenstein, he finds out the Nazis are resurrecting corpses as well as developing all manner of advanced technology (like a viral V2 missile, rocket planes, Super Soldier cyborgs), all of this fitting into a mysterious plot to revive an evil conqueror from past times.

There's also a free standalone game running in the same engine and with the same thematic, called Wolfenstein: Enemy Territory. Originally, it was going to be a free addon for RTCW, but that changed during the development. Enemy Territory was the last game in the series to be released before the death of Wolfenstein creator Silas S. Warner in 2004, though he had no involvement in the game.

In the QuakeCon 2010, Id announced that the source code of both this game and the multiplayer standalone game Wolfenstein: Enemy Territory have been released under the General Public License version 3. (Or GPLv3 if you want)