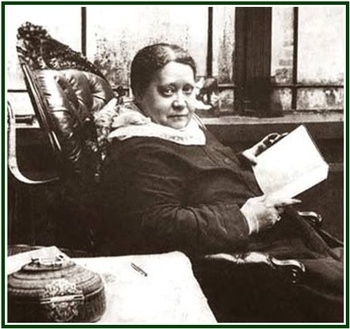 The whole order of nature evinces a progressive march towards a higher life.

Who is Helena Petrovna Blavatsky (12 August [31 July in the Old Style calendar]note Russia did not start using the Gregorian Calendar until after The Russian Revolution 1831 – 8 May 1891)?

Depending upon who you ask, she is either the foremost pioneer of modern spirituality, one of the greats in the field of comparative theology, or the perpetrator of one of the most notorious frauds in human history. Or possibly all three. Regardless of your point of view, Helena Petrovna Blavatsky is the founder and chief figure of the Theosophical Society. She is largely responsible for the turn-of-the-century occult revival, as well as the popularization of New Age spirituality.

Much of Blavatsky's life is shrouded in mystery. It is known that she was born Helena von Huhn in the Russian Empire in around 1831. She was later married off to the much older nobleman Nikifor Blavatsky, though this only lasted about 3 months before she ran off. No one really knows where she went off to or what she was doing, but somehow she ended up in New York in 1873, homeless, penniless, and with a newfound fascination with the occult. She met the retired Colonel Henry Steel Olcott during a spirit séance in Vermont, and the two of them formed a lifelong partnership. Convinced that Blavatsky was a powerful medium who had spent her dark years training with a secretive cabal of spiritual masters in Tibet, Olcott helped Blavatsky found the Theosophical Society, dedicated to the study of the occult and esoteric sciences, the creation of a universal brotherhood of mankind, and encourage the study of different religions. Theosophy quickly became the major player in the occult world, thanks to a combination of Madame Blavatsky's magnetic, larger-than-life personality, her surprisingly comprehensive knowledge of occult lore, and the intrigue of her communication with the hidden "Masters," who communicated with her via letters manifested through the astral realm. Beyond the celebrity of Blavatsky's work, her greatest accomplishment was introducing the doctrines of Hinduism and Buddhism to the West, free from the distortions of orientalists and Christian missionaries, and, through her personal connections, publicizing hidden doctrines usually reserved for a special elite.note Many orthodox Hindus, especially Brahmin priests, did not take kindly to their secrets being bandied about by a group of outsiders. Many Buddhists straight up accused her of making up "esoteric" Buddhist doctrines whole-cloth.

The society quickly became a worldwide phenomenon: Olcott became famous for his revival of Buddhism in Sri Lanka (where he is still revered by Buddhists), the Society was becoming an important player in the Indian Independence and Hindu reform movements, and Blavatsky herself was causing quite a stir in polite society in Europe and America. To her admirers, she was the real deal, a font of spiritual knowledge set to revolutionize religion the world over. Those of a more traditionally religious bent were near universal in deriding her as a charlatan, scandalized not only by her promotion of Hindu, New Age, and Buddhist doctrines as a superior form of spirituality, but also the sometimes overtly anti-Christian nature of her writings. Her claims to discovering a new spiritual aspect to science, her critique of Darwinian evolution, and her anthropological theories, which claimed humanity descended from an ancient super-race called the Atlanteans, placed her firmly in crank territory as far as the orthodox scientific community was concerned. Other occultists, such as the various Hermetic Orders and others studying Eastern mysticism disliked her syncretic approach, believing she presented a perverted mish-mash of distinct spiritual traditions. And the British government didn't take to kindly to her political connections in India, accusing her of sedition.

Blavatsky's popularity took a serious hit after accepting the London-based Society for Psychical Research's invitation to study her powers. The report issued by the Society conclusively argued that Blavatsky was "one of the most accomplished, ingenious, and interesting imposters in history". The report was later criticized and disclaimed for the apparent bias and spurious research practices of its chief investigator, Richard Hodgson, but the damage had already been done. Many of Blavatsky's most prominent supporters denounced and abandoned her, convinced they had been party to an ingenious fraud, and the society lost much of its standing the world over. However, it remained a staple of Indian society for quite some time after Blavatsky's death, thanks in no small part to the organization's support for Indian independence from British Rule.

In death, as in life, Blavatsky is a highly polarizing figure. The most controversial aspect of her life was her communication with the so-called Masters, whom allegedly dictated all of her spiritual doctrines to her, and with whom she acquired her formidable command of occult lore. The existence of the Masters is considered a fact only by dedicated Theosophists, and even then not all of them agree on their nature: are they physical beings on a mountain in Tibet or spiritual creatures from another plain of existence? And if they aren't who Blavatsky said they are, who are they? An idealization of her true teachers? A fiction to attribute occult knowledge she got from other sources to more impressive authors? An inside joke that was taken too far? No one knows for sure.

The apparent racism and antisemitism of her works also tends to draw the ire of modern-day critics. Most notably, the Nazis used the vaguely racialist implications of her works to justify their own racial anthropology, which tainted Blavatsky's work by association. Blavatsky herself does not seem to have harbored overtly racist views (at least, not in the context of her times), though she was virulently anti-Semitic, referring to the Jews as "spiritually degenerate". Blavatsky did believe that African and Aboriginal people were biologically and culturally inferior to white Europeans, which was a commonly accepted scientific belief at the time. However, she did not believe that this justified political oppression, which, while patronizing at best by today's standards, was somewhat progressive during a time of widespread imperialism. Nevertheless, her views in this regard have not aged well, which is a sticking point for modern readers of her works. Her theory of "Root Races" is also commonly misunderstood, in part due to her usage of the term "Aryan" which nowadays has Unfortunate Implications. Unlike the Nazis, she believed that all extant humans were part of the Aryan race (including the Jews, despite her aforementioned anti-Semitism), which was simply one of several stages in human evolution.

Regardless of the veracity of her powers, Madame Blavatsky has been called, with some justification, the Mother of Modern Spirituality. No lesser personage than Mahatma Gandhi called her Theosophy "Hinduism its best." The vast majority of modern Western esotericism, admitted or not, draws at least some inspiration from her work. And her contribution to comparative religion are directly responsible for Buddhist and Hindu modernism.