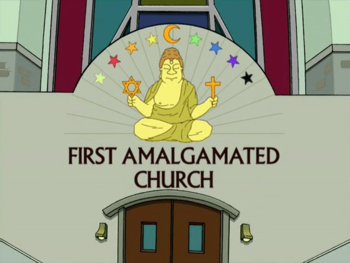 Okay, doubtful that it's really the first.
Advertisement:

This is when a constructed fictional religion is clearly a mix of any number of real-world religions. That Other Wiki knows this process as it happens in Real Life as syncretism

Differs from Crossover Cosmology in that this creates a 'new' cosmology from pieces of established idea systems. Popular in Space Opera and Science Fiction as representative of alien cultures. A subtrope of Ninja Pirate Zombie Robot and a Sister Trope to Culture Chop Suey. Can also be Truth in Television since there are few religions that don't share certain rituals or beliefs with other religions.

This seems to come up a lot in anime fantasy settings, though it could (and oftentimes appears to) just be a cultural misunderstanding of Western ideas and philosophies while substituting familiar concepts (like Buddhism and Shintoism) into the knowledge gaps. Also, sometimes in anime, instead of All Christianity Being Catholic, you'll see a mix-mash of ideas from various Christian denominations all pooled into a single faith. This probably has a lot more to do with the aforementioned Critical Research Failure, though.

Compare and contrast Church of Saint Genericus, where the religious details could cover any number of faiths simply because they're left nonspecific.