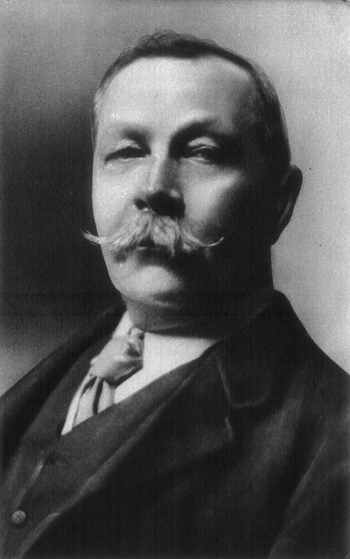 "I should dearly love that the world should be ever so little better for my presence. Even on this small stage we have our two sides, and something might be done by throwing all one's weight on the scale of breadth, tolerance, charity, temperance, peace, and kindliness to man and beast. We can't all strike very big blows, and even the little ones count for something."
Advertisement:

Sir Arthur Ignatius Conan Doyle (22 May 1859 – 7 July 1930) was the creator of Sherlock Holmes and Professor Challenger. He wrote many other stories, but mostly only the ones regarding the famous detective are remembered now. Anyone with an interest in medieval history and historical fiction should read his novel The White Company, providing both a fairly accurate depiction of the subject for its time (and the knowledge they had), and a fine insight into A.C.D.'s own time; British Imperialism, The Empire (after all, it was the largest ever), and the mentality that justified and drove it.

He started his career as a physician and took advanced degrees in medicine and opthalmology, but found much more success from his literary pursuits than in medical practice. One of his medical professors, Joseph Bell, is said to be the inspiration for Sherlock Holmes, with his uncanny knack for observation and deduction. Doyle was also a keen amateur athlete, taking respectable turns in cricket, boxing, football, and golf. And he dabbled successfully in architecture, supporting the preservation of historic buildings and providing a design that was used for the Lyndhurst Park Hotel

More controversially, he had a pronounced mystical streak, becoming a prominent advocate for psychical research and Spiritualism. This led to many disputes with other public figures such as Harry Houdini and Joseph McCabe who took a more skeptical view. In the case of the former, it cost Doyle his friendship with Houdini after a time. Houdini would explain exactly what he was doing with regards to cold reading, psychics, seances, et cetera, all so that Doyle could see that self-professed psychics were fraudsters that preyed on the vulnerable. However, Doyle ended up telling Houdini that he clearly had a spiritual gift that should be shared with the world. Despite several of his claims being debunked, Doyle remained a staunch believer and advocate, even having some of his fictional characters such as Professor Challenger turn to Spiritualism.

Works by Arthur Conan Doyle with their own trope pages include:

Provides the Trope Namer to:

Other works by Arthur Conan Doyle provide examples of: