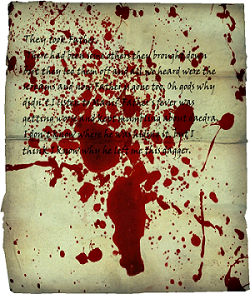 There's a story here...oh, and there's something written on it too.
Advertisement:

This is when you have a letter or note that for some reason has gotten blood on it. Letters and notes tell much about the person who wrote them, but when there's one that has splotches or splatters of blood, you know there's another story being told as well. Since most paper is white, the presence of blood stands out on it, and people, when they see blood in unusual places, have a tendency to start assuming the worst.

In Mystery Fiction settings, these often become clues, sometimes a Dying Clue, for the Great Detective who finds them. Journals and books can also count, as well as newspapers and documents. In some cases, the blood makes it difficult or impossible to make out what the letter actually says. In tales centering on espionage, captured documents being stained with blood presents the audience with a grisly clue as to how the documents were acquired.

Compare Couldn't Find a Pen for situations when a message is actually written in blood, which may overlap with this, as well as Apocalyptic Log and That Was the Last Entry.