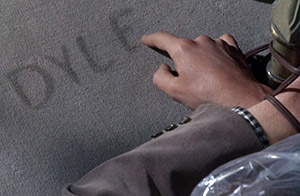 In whodunnits, victims constantly seem to be identifying their murderers with their dying breaths. Fictional murder victims are very considerate in that way.
—TheRealJims, "Who REALLY Shot Mr. Burns? (Part 1)"
Advertisement:

The murder victim makes a final effort to identify their killer. To use this convincingly, the author must give a good reason why the victim left a cryptic message instead of writing the killer's name. The writer is rarely asked to justify whether the Almost Dead Guy would have the energy or foresight to leave a message at all; this is also called the "dying message". Compare Apocalyptic Log.

If what they used to write was their own blood, see also Couldn't Find a Pen. See also His Name Is....

The message was incomplete

Since the author is dying, a frequent subversion is that the killer is actually able to use a dying message to their advantage — either modifying it to lead to another party, or acting on the message themselves.