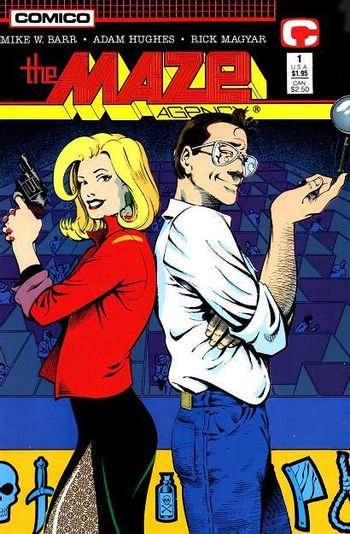 The Maze Agency is an American mystery comic book series created by Mike W. Barr and first published in 1988. It revolves around a pair of detectives (Jennifer Mays and Gabriel Webb) and their adventures solving puzzling murders. It was first published by Comico Comics for 7 issues in 1988-1989, and when that company ceased operations, it was picked up by Innovation Comics for another 16 issues (8-23), continuing the numbering and running to 1991 plus an annual and a special. Caliber Comics brought it back in the late 90s as a three-issue miniseries. IDW Publishing then published 3 issues in the early 2000s.

The Maze Agency was a "fair-play" detective series, where the readers were presented with the same clues the characters were, and thus an equal chance to solve the crimes.