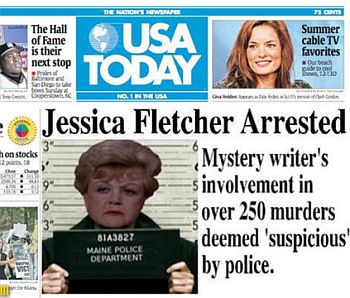 "...the wedding part I could almost forgive him for, since he saved Candace from marrying a pathological liar and would-be bigamist, but I deeply resented the corpse.
"Most people can go their whole lives without getting involved with a murder. Monk is lucky if he can go outside and get his morning paper off his stoop without tripping over a dead body. Murders happen around him with such astonishing frequency that it's long since gone beyond coincidental and borders on supernatural.
Advertisement:
"I guess on some level I knew the moment Monk showed up on the plane that it was inevitable that, one way or another, I'd get dragged into a homicide investigation in Hawaii."
— Natalie Teeger, Mr Monk Goes To Hawaii

A Mystery Magnet attracts mysteries, usually murders, with the occasional case of kidnapping, extortion and fraud for variety. Wherever they go, people drop dead at their feet, often with a cryptic dying message. This behaviour isn't planned by anyone — there is no killer stalking the magnet, nor is the magnet responsible for the deaths — it's just pure coincidence.

Of course, this is all arranged by the show's creators so that the magnet always has something interesting to do.

If the Mystery Magnet stays in one spot, such as a little town called Cabot Cove, Maine, long enough, enough corpses will soon accumulate that one would expect people to wonder why exactly their quiet-sleepy-little-town is so unlucky. If this happened in real life the police would suspect the magnet of being a serial killer and would question them frequently; in fiction there may be some Lampshade Hanging about the unlikelihood of it all, but it seldom goes beyond that.

The Mystery Magnet will generally become an Amateur Sleuth in self defence. If not, they'll be a sidekick of the police detective who solves all the cases they stumble into. Some are cases of little old ladies investigating. Others are Kid Detectives. Not all amateur sleuths are mystery magnets, however. Some amateurs, and most professionals, deliberately go to the crime scene and investigate. With mystery magnets, it's the exact reverse; the crime scene comes to them, by seeming chance.

Sometimes an entire ensemble can be a Mystery Magnet. When professional detectives are on Busman's Holiday, they can often temporarily become mystery magnets, but this trope is only for those who are like that all the time.

Very often these are Murder Mystery Magnets, making the implications even more worrisome. And Jessica Fletcher is the worst offender, which is the reason she is our page image here.

This only covers cases where there is an actual mystery (i.e crime mystery), with a mundane solution. If there is weirdness involved, or no detective work is required to identify the criminals, the character is some other type of Plot Magnet.