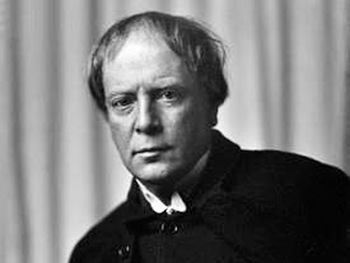 "He will, I believe, be heard from some time as one of the great decadents; for he has crystallized in clay and will one day mirror in marble those nightmares and phantasies which Arthur Machen evokes in prose, and Clark Ashton Smith makes visible in verse and in painting."
— from "The Call of Cthulhu" by H. P. Lovecraft
Advertisement:

(real name Arthur Llewellyn Jones; 3 March 1863 – 15 December 1947) was a Welsh author and actor best known for his fantasy and horror tales set in the decadent Edwardian era. He was a major influence on H. P. Lovecraft, who considered him a modern master who could create "cosmic horror raised to its most artistic pitch." In addition to The Great God Pan, Lovecraft also praised "The Novel of the Black Seal" and "The Novel of the White Powder" (The Three Imposters) as "approach[ing] the absolute culmination of loathsome fright" and used them as the basis for his own works Cool Air and The Colour Out of Space. Along with his American contemporary Robert W. Chambers, Machen is noted today as one of the forerunners of the Cosmic Horror genre Lovecraft pioneered.

Machen was born to a poor vicar in rural Wales. As an adult, his poverty was greatly ameliorated by an inheritance left him by several Scottish relatives, which also enabled him to devote more time to writing. He took up acting shortly after the death of his first wife in 1899 and associated with Aleister Crowley and his circle, mostly out of curiosity. Machen is also responsible for "The Angels of Mons

", a fictional tale he wrote for a newspaper during World War I that many subsequently treated as a true story - despite his insistence that it was no such thing.

After a brief period of popularity in the 1920s, Machen's fortunes faded. On his eightieth birthday in 1943, however, a literary appeal was launched to formally recognize him as a distinguished man of letters. Signers of the appeal included T. S. Eliot, George Bernard Shaw, Walter de la Mare, Algernon Blackwood, and John Masefield. Its success allowed Machen to live out his final years in relative comfort.

The Great God Pan, Machen's most famous work, has its own page. Tropes appearing in Machen's other stories include: