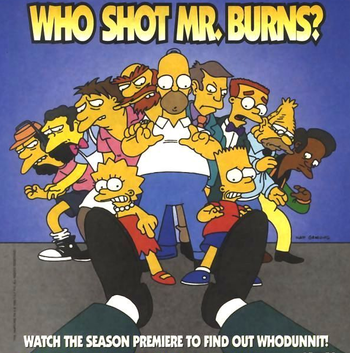 Jake: [in German accent] Well, well, well. What do we have here? It appears a crime has been committed and no-one will confess.
Amy: Doing a German accent?
Jake: I was going for Belgian, like in Murder on the Orient Express.
— Brooklyn Nine-Nine, "Dillman"
Advertisement:

I hereby welcome you to the accusing parlor to discuss... the Mystery Episode.

The Mystery Episode is an episode where the characters attempt to solve a mystery. The mystery in question can be something as mundane as a stolen item to something as serious as murder. The characters will look for clues, make deductions, and finally finger a culprit. The consequences may be suitable for the crime, but not always.

As you'd expect, this only applies if the characters don't solve mysteries on a regular basis, so Detective Dramas and Police Procedurals will not be accepted. Sister trope to Noir Episode and Heist Episode. Thriller on the Express occurs when this happens on a train. And no, this does not refer to episodes that are so ambiguous you can't tell what show they're from.

When Arlo's follow-up package from Edmee does not come and feels convinced someone took it, he is determined to find the thief.

When Arlo's follow-up package from Edmee does not come and feels convinced someone took it, he is determined to find the thief.