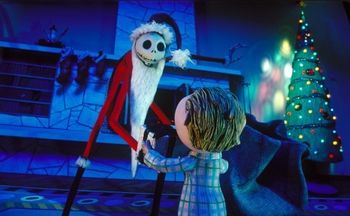 "...I bet I could improve it too, and that's exactly what I'll do!"
Advertisement:

There are people who hate Christmas; those that want to see it end in flames and screams and sad faces. But one cannot accomplish such a thing as ruining Christmas so easily, as the spirit of Christmas is often too powerful for one person to ruin it so thoroughly.

But sometimes the road to Hell is paved with good intentions. Enter this guy.

The Anti-Grinch loves Christmas. Loves it in the "going out of their way to make it special" kind of way. They might even want to add to it and share it with the world. This usually involves playing as Santa Claus as he or she brings presents to all of the good little boys and girls.

This has a history of backfiring, as usually what they bring to the table isn't really something appropriate for the occasion, poisoning the season and those warm-fuzzy feelings. This is mostly out of ignorance of their actions, the Anti-Grinch realizing their mistake and fixing it at the very last second.

A variant of this is a character's overzealouness for Christmas driving them to wish for it to come every day, but eventually learn that way too much of a good thing can ruin it for everybody.

Consider the opposite of The Grinch and how he failed to steal Christmas. The Anti-Grinch, by contrast, doesn't set out to steal anything, but otherwise pulls off exactly what The Grinch deliberately set out to do.