How the Character Stole Christmas 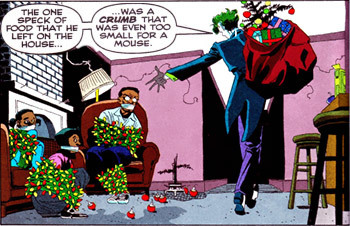 You're a mean one, Mr. J.!
"Are those cave-kids gonna whimper when they find out I kooped all their toys! Hahahahaha! Merry Koopa Christmas, boys and girls!"
— Bowser Koopa, the Super Mario World Christmas Episode
Advertisement:

Any story in a show that is a take on How the Grinch Stole Christmas! (even if it's a different holiday).

Basically, a villainous character attempts to stop a beloved holiday from coming by stealing all the material elements of the occasion. However, he is stunned to see that all his victims care about is the holiday's true spiritual significance, which he could not steal. The villain is so profoundly moved that he has a change of heart, returns all his loot without prompting and is welcomed to celebrate the occasion with his former victims.

The story isn't in the public domain, but as long as they are clear parodies, the plot isn't violating any copyrights.

A Sub-Trope of Whole Plot Reference (so anything less than the plot is merely a Shout-Out).

Sister Trope to Yet Another Christmas Carol, "Gift of the Magi" Plot, Christmas Every Day, The Parody Before Christmas, and It's a Wonderful Plot.

Not to be confused with The Grinch, which is the name for a character type (albeit one which might be likely to try this ploy).