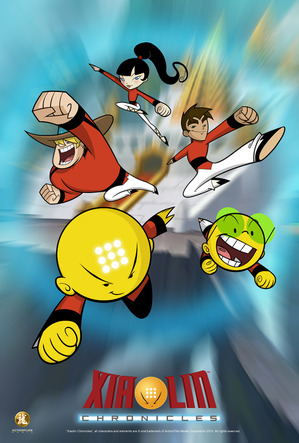 Revival title of Xiaolin Showdown that premiered in August of 2013. Unlike the WB produced predecessor, this series is a collaboration from American and French companies, ActionFliks Media Corp and Genao Productions and aired on Disney XD.

At the Xiaolin Temple, four teenagers (well, three and one child) – Omi, Raimundo, Kimiko, and Clay – are chosen to become the next Xiaolin Dragons. In addition to their martial arts training and other monk duties, the team is tasked with finding the mystical artifacts known as Shen Gong Wu. Created by Grand Master Dashi, the temple’s original founder, these artifacts balance the forces of good and evil.

Upon reaching the rank of Shoku Warriors, the monks are joined by a new member, Ping Pong – the Dragon of Wood. Together, the quintet strives to become full-fledged Xiaolin Dragons, protecting both the world and the Shen Gong Wu. Unfortunately this comes into direct conflict with the gallery of villains, who want to use Shen Gong Wu to take over the world.

This includes Jack Spicer, the self-proclaimed evil genius who’s a master of robotics and technology. Wuya, an ancient Heylin witch defeated by Grand Master Dashi and turned into a mere ghost in consequence. Lastly, Chase Young, an immortal villain who with the help his partner Shadow, wants to mold the world into his own liking.

The series concluded in July of 2015, despite the announcement of a second season. In a published newsletter [1]

, the creator stated that Xiaolin Chronicles will be a standalone series, and the franchise will continue in a new format similar to the original series.

The character sheet is shared with its original series, so go there for information on the new characters.